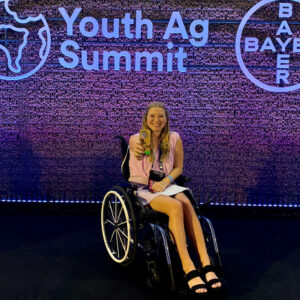 …seeing all the amazing discoveries and innovations of all the young people who went to CWSF showed me that it’s never too early and we’re never too young or inexperienced to solve big problems and create an even bigger change.

Science fair is full of surprises, and even when life takes unexpected directions, it’s the same curiosity & mindset which you can take with you along the journey. We chatted with Kelcie about her adventures in STEM, here’s what she had to say.

1. Can you tell me about your science fair experience, and how you got started?

I fell in love with science early in my childhood. I was that kid who was constantly curious of the world around me and was always asking questions to try to satisfy that curiosity. When I realized that science was this platform where I could try and discover all of the answers for myself – I was hooked. I did my very first science fair project when I was around 8 – and it was actually for my brother who was 13 at the time and had to do a mandatory project as part of his science class. I meticulously measured each little plant every day, watering them carefully and filling a notebook with all the daily observations. Despite his project being done by a 3rd grader he got an A.

After that I did a project every year until I graduated high school – it was something I looked forward to every year and I honestly contemplated doing an extra year of high school just to get another year in!

2. Can you tell me about your career journey up to this point?

It might seem crazy but the project I started at 15 in a basement lab as my science fair project actually turned into my career! After my first project on phytoremediation in grade 10 I went on to do a follow up project in grade 12 and the research just grew from there. I took the leap into entrepreneurship at 21 when I founded my first biotech company, MycoRemedy, to commercialize my research. From there I fulfilled my childhood dream of having my own lab and then took a break from active research to found a second startup in the AgTech space utilizing blockchain as a supply chain management tool to prevent fraud and tampering in the honey industry.

Now I am focusing my voice on efforts to diversify the environmental, outdoor, and climate spaces to ensure that the voices being heard are reflective of the diversity of our world – especially when it comes to making sure that youth, in particular disabled youth, have an opportunity and voice to become leaders in a space they have been traditionally excluded from.

Although my work started in science and then branched into entrepreneurship and now advocacy – it has all been driven and rooted in the desire to use innovation to create impact. I never thought I would be anything but a scientist – it was my first love after all, but I realized that the reason I loved science was because it allowed me to solve problems and create solutions. As much as I love pure science and being in the lab, when I was diagnosed with a rare disease and became chronically ill in my early 20’s it became clear to me that the best way for me to really magnify my impact and create change wasn’t by being in the lab but instead was by creating opportunities and empowering other young people to use innovation to solve problems in their communities and the world.

4. How did your CWSF/science fair experience contribute to your life path/career goals?

Science fair is really one of the fundamental things that shaped my path, not just in my career but really in life overall. I can’t even imagine how different my life might be had I never attended my first science fair – or had I stopped before attending my first CWSF in 2009. Science fair showed me that there are no limits on who can solve problems, who can innovate and who can create change. It gave me the courage as a young innovator to found my own company and to believe in my ideas and that even though I was young I could still solve big problems.

A lot of time as young people we’re constantly told that we need to be older, have more experience, or be more educated. Basically, we’re told we have to wait. But seeing all the amazing discoveries and innovations of all the young people who went to CWSF showed me that it’s never too early and we’re never too young or inexperienced to solve big problems and create an even bigger change.

5. Are there any certain role models/people who inspire you?

Jane Goodall has always been a big inspiration to me because she too was told as a young woman that because of who she was and the body she was born into that she couldn’t possibly be a scientist and would never be successful. Boy, did she prove everyone wrong.

6. What STEM-related achievement are you most proud of?

Hmm this is a tricky one. When I won my gold medal as CWSF, and won my regional fair in my grade 12 year, it seemed like such a huge accomplishment but now that I’m a bit older I’ve realized that while winning things and the achievements are great, it’s not really what it’s all about. Now I think what I am most proud of is that I’ve got to continue working with and speaking to youth and the next generation of innovators and be part of their journeys.

7. What are the main challenges facing you in your work?

One of the challenges that has been pretty constant is being underestimated first because of my age and gender, and now the additional doubt people have of my potential because of my disability. People, especially in more traditional STEM communities, have previously had a really strong bias about what a scientist looked like, and almost like a checklist, of what personal characteristics make your research “more” valuable. When I founded my company, I was 21 and hadn’t completed my degree, in a field dominated by highly educated men, and often I felt underestimated and that I didn’t belong.

8. What are the key learnings you’ve identified through your work?

My work focuses on developing natural solutions to environmental problems – it started with using phytoremediation and mycoremediation to clean up oil contaminated soil but what it taught me is that nature already has a lot of solutions to a lot of the problems we face; we simply need to spend more time listening and learning from nature. There are lots of opportunities for us to use nature-based solutions and biomimicry to make our world a better place to live.

9. What is one piece of advice you have for young scientists embarking on their project?

It’s never too early to start and you are never too young to make an impact. The most amazing part of innovation is that it’s for everyone and your unique experiences, backgrounds, and ideas, are what will allow you to create, invent, discover, and ultimately change your community and the world.

Don’t let anyone tell you that you are too young or too inexperienced to make a difference. Learn to treat your age as an advantage that allows you to approach problems in your own unique and creative way.

I hope in the future we see more crosspollination and intersectionality between not only different fields of science but also between entire industries. We need more scientists who are also entrepreneurs and more global leaders who are also scientists. We have so many solutions to global problems that have been solved in labs but get stuck there. I hope in the future we share our ideas more openly, communicate our research in ways that are accessible and understandable to the public, and apply the solutions we create in our labs to the problems facing communities in our world.

11. What would you say to potential sponsors or partners of Youth Science Canada?

That it’s about so much more than just a science fair. The impact from the programs like the CWSF extend so much further than just a competition. It’s a place where the next generation of innovators, scientists, and changemakers are given a platform to create and the support to turn their ideas into reality.