“Congratulations to our three winners,” said Reni Barlow, executive director at Youth Science Canada. “Ground-breaking projects and hard work have earned our young Canadian scientists’ top honours, and we are delighted to see all of their hard work be rewarded on the international stage.”

The 33rd EUCYS was held in Leiden, Netherlands, September 13 to 18. The event is Europe’s premier STEM project competition for youth and represents an opportunity for future generations of scientists to gather. The event saw 133 young scientists aged 14 to 20 from 35 countries compete for the prestigious awards. Projects were presented to an international jury of renowned scientists. In total 80 prizes were awarded. Hanze (Louis) Wu, Koral Kulacoglu and Annabelle Rayson were three of 16 students to win top prizes in the competition.

“It is great to see Canadian students bring home top international awards, demonstrating once again that Canadian youth STEM is world-class,” said Barlow. “Our goal is to enable all Canadian youth to continue to innovate, discover and pursue their interests in STEM.” 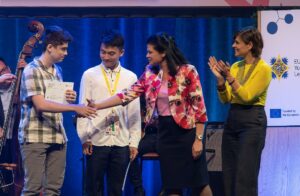 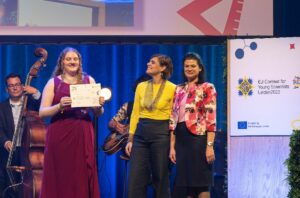 EUCYS 2023 will take place in Brussels, Belgium. After three years of virtual events, the Canada-Wide Science Fair will return to in-person format in 2023, from May 14 to 19 at the Edmonton Convention Centre in Alberta.

Youth Science Canada fuels the curiosity of Canadian youth through STEM projects. A registered charity incorporated in 1966, YSC delivers on its mission through national programs including mySTEMspace, the National STEM Fair Network, Canada-Wide Science Fair, STEM Expo, Team Canada representation at international fairs and Smarter Science professional development for teachers. Through these programs, YSC provides direct support to the more than 500,000 students who do STEM projects in any given year. For more information, visit youthscience.ca

The European Union Contest for Young Scientists was set up by the European Commission in 1989 to encourage co-operation and exchange between young scientists and to give them an opportunity to be guided by some of Europe’s most prominent researchers. Every year, the event gathers promising young scientists from all over Europe and beyond, to present their projects to a panel of international judges. Only projects that have won a first prize at a national science competition are invited to participate at EUCYS. For a detailed overview of the projects, prizes and jury members, please see the EUCYS website or the EUCYS webpage on the EC website.